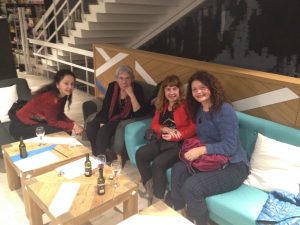 It’s a rainy day and I’m sitting at the café of a large bookstore in the centre of Belgrade with three old friends, right across from a shelf with books by Albert Einstein, Nikola Tesla and Gabriel Garcia Márquez. Coincidence? How long have we girls known each other?

When I was 15, I met Ljubica Beljanski Ristić, a young woman who was in charge of a very special drama studio called Skozoriste. It was there that I took my first steps towards a different kind of theatre, the kind you make yourself and in which you find your own creativity. Škozorište was a place where a whole new generation of artists was formed and it left its mark on the development of drama and put participatory theatre in the Balkans on the map. It is a form of theatre that is not directed from the top down; it invites young makers to actively think and create on their own.

Dijana Milosević and I have known each other since the beginning of our theatre studies, I in the Netherlands and she in Belgrade. In 1985, she came to stay with me in Utrecht, on her way to Odin Teatret in Denmark with mutual friends of ours. The Danish Odin Theatre would later become our shared passion and a place where we would meet time and again. After busying myself with various theatrical experiments – which I had given the name of ZID Teatar – in my hometown of Belgrade, I went to study in Utrecht at the Academy for Expression, which at the time was one of the most interesting schools in all of Europe. But pretty soon I discovered Odin Teatret, a very original group of theatre makers in the North of the Danish Jutland region, led by the Italian director Eugenio Barba and made up of actors from various countries. International, authentic, and open. Through the years, Dijana and I would meet frequently in the small town of Holstebro, Odin’s home base. Meanwhile, Dijana and our friend Jadranka Andjelić had started Dah Teatar and were touring all over the world with that group. The last time we saw each other was at the 50-year anniversary of Odin, in June 2015. It was a celebration that transcended the word ‘festival’ as it was an international gathering of numerous theatre people from all over the world.

Tatjana Pajović I have known personally since the early 1990s, but our paths had already crossed long before that at Belgrade’s ballet school, which we both attended from an early age on. She was an exceptionally good pupil and dancer. After a successful career in ballet she worked with a number of theatre groups and founded her own community theatre group, Pod Teatar. And this is how the three of us met again at the BITEF Poliphony Festival, where Ljubica had combined our groups, ZID and POD, in a coproduction and had invited Dijana as moderator for the post-performance discussions.

Now we are making up new plans for a collaboration of our companies POD, DAH and ZID. The foundation of everything we do today was laid long ago in the special climate of a country that now no longer exists and was called Yugoslavia. It was a country unlike any other, with a political system called ‘socialist self-government’. I have always experienced it as a safe environment, quiet and orderly, without social upheaval, whether people felt responsible for and committed to the prosperity they enjoyed. Was it a utopia? What made it special was that there was no unambiguous norm for who you were supposed to be. We were ‘different’, all four of us, different from other people, as we were original and creative. We didn’t want to follow the mainstream but take our own path, and we could. That’s how we found each other, when we were young, in the world of theatre. And now again, in new plans, in the 21st century.