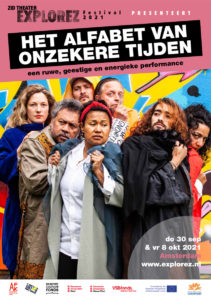 A Change is gonna come is a famous song by Sam Cooke, and a phrase that was repeated like a mantra throughout the ExploreZ Festival 2021. By our festival team, by the makers, the players, artists and by the audience.
Where do we want to go with art and theatre? We posed this question to the makers time after time during the talks at the end of the performances.
And we asked everyone who came to watch, participated in discussions, followed workshops, and experienced the festival: What role do theatre and the performing arts play in my life?

The time has come for a radical switch to meaningful art. During four weeks I joined the audience and watched the performances, I spoke to people and makers, and had everyone write something on the back of the HOOP? postcards, for which the enthusiasm exceeded expectations.

An air of optimism was bubbling—and a need to meet each other. Both the performers and the spectators were sometimes intensely touched, admired each other and were very interested. That’s why the conversations were so terribly important. The moment after our performance The Alphabet of Uncertain Times at the Vondelkerk (the audience was positioned in a large circle around the stage), where everyone just sat and talked, was magical.
So for me as a maker I can say: we succeeded. This unusual and imaginative performance has established a deep relationship with the people, the audience.
But there is more to it, because most of the personal stories were told theatrically in the performances, and the people wanted to know, understand, and make contact with the makers, who often come from a different “walk of life” than themselves.
This got me thinking. People are looking for a connection with the unknown, for expanding their own world, for adding something or someone they didn’t know before. And who made up the audience? A super nice mix of all kinds of people who live in Amsterdam and elsewhere in the Netherlands, theatre audiences and local residents, LGBTI communities, refugees, young people and the elderly…it was like standing at the station and watching everyone pass by.
And that made me feel positive, because for me this is where the power of art and theatre lies in particular: always opening doors of unknown worlds for each other.
And we have firmly established that with ExploreZ 2021. With 16 performances, and the international guest performances from Morocco and Serbia with young makers who made their personal testimonies about the world as they see it. Where the concepts of form and aesthetics were questioned and shown with great commitment.

I believe in that commitment, that involvement. The time is ripe to a change the role that art and theatre in particular have.
There was one thing that was missing: that was the attention of the press. The explanation? The press today just can’t place it. For one it is too small and too local, the other wonders if this is really art, and for yet another it does not fit within their assignment about who and what they should write about. And some really don’t want to be disturbed with this. The few reviewers who did come and write were enthusiastic and moved. But like I said, A change is gonna come. Like the famous playwright Bertold Brecht said, “Art is not a mirror to represent reality, but a hammer to shape it.” Onwards and upwards to ExploreZ 2022.

And for your inspiration: theatre director Joy C also ended his Tedx talk with the question “Can Theatre change the World?”, and with the same words as Brecht. https://youtu.be/PZPz4YNvZIo

« Theatre of the future,after the crisis