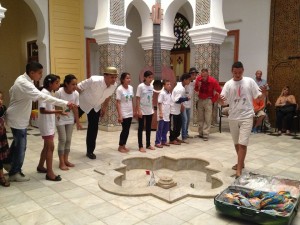 Since 2012, ZID collaborates with Cultural Centre Dar Amsterdam in the town of Larache, in Morocco. Over the years, several work visits took place and collaborative projects were realised, all aimed at exchanging expertise and give trainings and workshops for children and youngsters at Dar Amsterdam. Developing a future vision of community art is one of the key elements of this collaboration. In 2014, our partners from Dar Amsterdam were involved in the preparations for the International Community Arts Festival ICAF in Rotterdam. This led to the development of a plan for a project in 2015: a joint performance of From the World’s Rooftops on Tour. The work process leading up to the performance is also about a further exchange of work methods and a deeper understanding of community art. Children and youngsters play an important part in this.

In February 2015, artistic co-leader Sebo Bakker, neighbourhood actor Mahmoud Ibrahim and theatre maker Daan Bosch went to Morocco, to make a start on the production of From the World’s Rooftops on Tour. This ZID team worked on the script with the coaches from Larache and designed the first scenes for the performance. The piece will be performed with children and youngsters and our cultural and social partners in Morocco in October 2015, and then in the Netherlands in November 2015. Our next visit is planned for May this year.