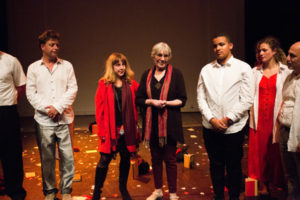 Karolina Spaić, founder, theatre director and director of ZID Theater in Amsterdam, and Tatjana Pajović, founder, theatre director and director of POD Theater in Belgrade, both participants in the first Bitef Polyphony and cooperation partners in the large-scale EU project Caravan Next, will jointly give a performance lecture entitled ‘The Art of Connecting’. With her ZID Theater, Karolina Spaić is a common thread throughout the years of Bitef Polyphony. This in an ever new context of merging, reflecting and reconsidering the common present.
For the past four years, Karolina Spaić has presented the developments of the Caravan Next project, whose main partner was Odin Teatret. ZID has invited POD as an associated partner during CN. For more than twenty years, Tatiana has been researching and using the theatre as a “space for questions – thoughts in action”, in a unique way. They will tell about their work processes since the first BITEF Polyphony and the developments they have made in it, for example through the exploration of the participatory art forms and ultimately working together in all four editions of the ExploreZ festival that ZID produced during Caravan Next, three in Amsterdam (2016, 2018) and one in Belgrade (2019).